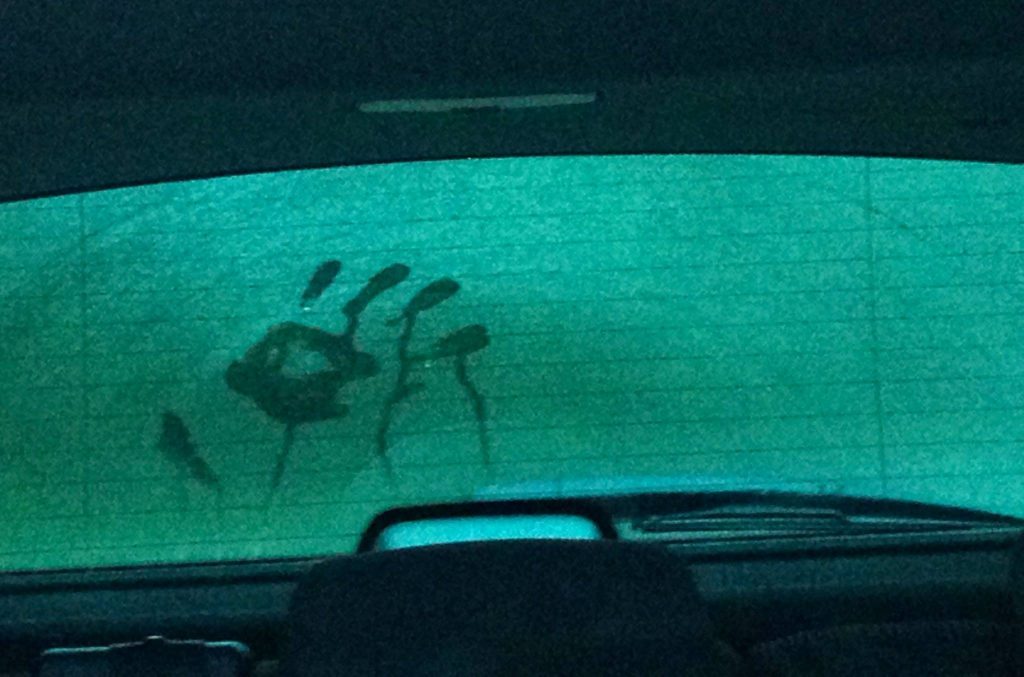 The Pursuit of Happiness

This morning as I looked in my rear view mirror, I noticed Max's hand print in the frost. It was a freezing cold day and I left the print there for ages, reluctantly watching it melt away as I defrosted the rear window slower than was probably safe.

I now have a tiny new white car to fit in with my post-divorce restyling. I tend to notice new things with my car as a consequence of its sheer tininess, it is by no means a mummy car. The car has become known as Cary McCarface after the almost named boat. You might remember the news story, https://www.theguardian.com/environment/2016/apr/17/boaty-mcboatface-wins-poll-to-name-polar-research-vessel. The Natural Environment Research Council put out a public vote to name their new boat. Over 124,000 votes went to “RRS Boaty McBoatface” but it was decided that it wouldn’t be a dignified enough name and the boat was eventually named “RRS David Attenborough”, which came in fifth. I also quite liked some of the other suggestions including “RRS It’s bloody cold here” and “RRS Mr Splashy Pants”.

So as a completely pointless act of defiance, our new car has a silly name that makes me smile. It is also far too small for my needs and fogs up immediately whatever the weather. But it does have a top that comes down so the boys can wave their hands in the air like they just don’t care and the front of the car looks like it’s smiling all the time. It kind of makes up for the shock lack of boot space, almost.

That handprint still stays clear in my mind as we drive to school. It makes me think about how big those hands have become. How I didn’t think they would ever get that big. It made me remember how many times I'd held those little hands in doctor's offices, how many hospital ID bands they had worn and how frightened I was every single minute, of every single day for years and years.

I realised that I hadn’t done that silent crying thing for ages while driving. There was a track by Athlete called Wires LINK < https://youtu.be/uriGngTXyrE > that had silly amounts of radio play when Max was at his worst. It was about the writer’s own daughter when she was in hospital.

Got to get to you

Got to see this through.

First night of your life,

Curled up on your own.

Looking at you now

You would never know..

I see it in your eyes

I remember wallowing in those lyrics for weeks. Now they just make me angry because for so many of us “You’ll be alright” turned out to be nonsense. What I do think now is some days he’ll be alright and some days he won’t. I watched Max, shaggy haired in my rear view mirror and realised that today was an alright day. I smiled at him, he smiled back and said "What?". He’s so age appropriate sometimes. Happy.